Happy July everyone! I am in the process of writing up a little blurb about celebrating (even acknowledging) the 4th of July in London. Needless to say it’s an interesting experience. I figured I would doing a little write-up here in addition to my other fun activities. Other items in this posting is about my experience at London Comic Con (*spoiler* it was awesome), British & Nike+ 10K, Magic Mike and a few favorites I have captured for the month!

4th of July
Celebrating 4th of July in London could only be compared to breaking up with a controlling boyfriend and then going to a party he is hosting with a bunch of his ex-girlfriends and celebrating the break-up. The ex-girlfriends being other American friends I chose to spend the evening celebrating in typical American-style eating hamburgers & drinking wine and lager.

To be fair, all of the non-Americans in town were very supportive, even bringing in Krispy Kremes into work to celebrate the occasion. I think everyone felt slightly sorry for us Americans having to work knowing our overseas family and friends were out watching fireworks and sleeping in. Unfortunately, I am not a donut-lover and to be honest I would prefer an Apple Pie or BBQ but was nice to see the old college try by friends and colleagues.

A pic from our night on the town with tiny sparklers. A fun time but looking forward to the American version! 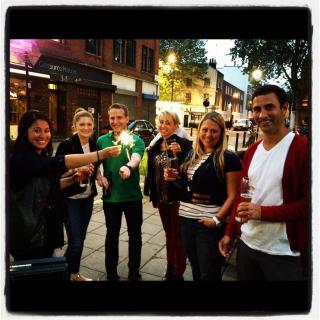 Comic Con!
Comic con is a little, okay a LOT smaller here than in the states. Though I did see quite a number of people dressed up, etc. and plenty of fabulous celebrities including cast members from Star Trek TNG, Farscape, Stargate SG1 &Firefly. I was able to go to a panel with Jewel Staite and Adam Baldwin talking about Serenity/Fire Fly. I was impressed how much Jewel knew in terms of episode details and behind the scenes information. Adam Baldwin did stress that he was massively jet-lagged but he provided the comic relief. Couldn’t believe how relatively calm I was about seeing everyone – minus Christopher Judge. Wow, he is amazing looking in person. I couldn’t believe how great and huge is in person. It was a cool experience but it was a bit annoying that final schedules were not released until very late and so you had to buy tickets for a day not knowing exactly what would be happening. It worked out on some level but the Game of Thrones panel was really early AM so we were not able to see that which was a bummer.

I plan to make a stop at San Diego Comic Con in the next couple of years – definitely a dream of mine. Seeing all of the tweets about how great it is makes me so jealous.

Link to London Film and Comic Con for reference: http://www.londonfilmandcomiccon.com/ 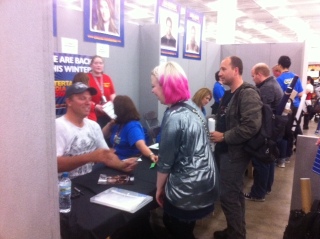 Lucy and I at Comic Con!

British Nike+ 10K
I had raced a 10K only once before, during the Philadelphia Triathlon. I had done really well the on the swim and then pretty well on the bike but had been struggling with a hip problem for some time and when I got to mile 3 in the run I was having a lot of problems. Thankfully, I had a chance to run a new one with this race. I was in Croatia the week before so I didn’t train the way I normally would have but did okay. The experience enough made it worth it. It was the most amazing feeling being out there with 30,000 other people just running through the streets of London in the rain with thousands of people clapping and cheering us on. Cannot express the feeling in words. Go do it yourself and you will see. It is an amazing race and well worth it! 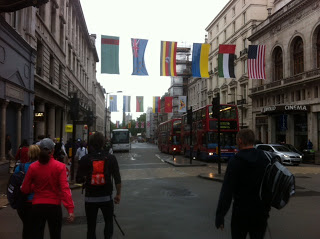 On my walk to the bag area – was a little tired and nervous. Mostly because I was very sore from weight lifting from the day before but it all worked out! 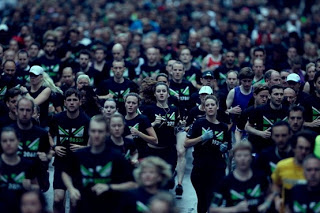 The sea of runners. Play on words because it was raining quite a bit throughout which I loved!

The route as shown on the http://www.thebritish10klondon.co.uk site

Post-Race and after lunch. I think I took a shower and then went straight for a mini nap after this photo. Finished the race in 1:12.

Magic Mike
Went and saw Magic Mike yesterday and it was really enjoyable. Ate dinner at good ol’ Prezzo for the third night in a week. They have this light option of salad and pizza that I pretty much get everytime I go. It’s quite reasonably and right down the street. I am still working out and eating healthy and haven’t lost any additional weight from the huge weight loss from the last few months but I think this next week with the additional miles I keep adding will help. So, if you are looking for a dinner and a movie experience with some girlfriends I would definitely suggest going to this show. It’s great! Might be a bit uncomfortable for the shy-type of girl but still, go! Break free a bit!

July Favorites
RUNNING:
Now using RunKeeper and Fleetly to capture all of my running activities and track with friends. I have a goal of 150 miles by the end of August. Might be a tough one cause I started later than I should have but going to really give it a go! I really enjoy having something I am accountable to and they also include routes to use so that I know how far I am going while I am outside. If only it didn’t rain every second of the day in London during the summer so I can go out more. Everyone here says this is more rain than usual but honestly, I don’t know if I believe that anymore.

Fleetly and RunKeeper – get the apps and check them out online!