Skip to content
The past couple of weeks have been busy and today I am enjoying a day of leisure! So I am using this opportunity to catch-up a bit on the blog!
Lucy and I met-up to watch the NFL playoffs last weekend at a nearby sports pub. The Steelers lost; I wasn’t even able to stay up for the entire game but really, did I need to see the entire loss? Probably not. On my way there I snapped up some pics of the St. Pancras Hotel. These pictures don’t do it justice – it is an amazing building.
That being said, it’s history is quite boring. Check out Wikipedia for the background but I was expecting more! Oh well. 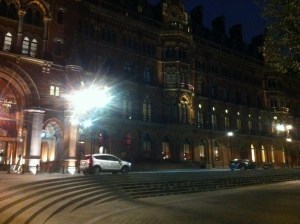 During the halftime for the Giants game there we a stand-up comedy act. He was 100% not funny. Please see the comedian and Lucy’s nonplussed facial expression. This is pretty much what we both looked like when we were not cringing. Apparently he is there often? WHY?! 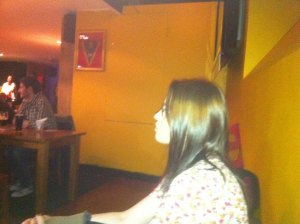 We enjoyed ourselves despite the poor routine!

Two interesting celebrity tidbits – I have seen two celebrities since coming back to London. Corey Feldman walking down Oxford Street sporting sunglasses at night (which is why I was looking closely in the first place) as he is a part of the UK show “Dancing on Ice,” and Michael Pitt (Boardwalk Empire – Jimmy) at the airport.
In other celebrity news – I am quite obsessed with dailymail.co.uk for celebrity news. I am still behind on who the famous people are out here and have a tendency to not know references in daily conversation but I am determined to know the references before I leave here!

My new routine these days has me “off the sauce” (that one is for Tori; an inside joke about how no one actually uses that phrase except for people who are trying to hard to be “cool”). Too much drinking when I first got here has made me almost completely disinterested in drinking these days. I have limited it to the weekends only and even then it’s usually only one day a week. Maybe that will change at some point but for now I am quite content. My flatmates are all very obsessed with healthy eating and exercising and that includes not drinking. My intention is to run in a half-marathon by summer so this is probably a good thing!

I don’t know if I mentioned that I live with 6 other people in a gigantic house in central London. I live on the very top floor which makes for some good step exercises! My house is made up of people from all over the world – Denmark, Poland, France, the States, Belgium, and Canada. No brits to speak of though I am subletting my spot from a girl from England.
2 pancake recipes that are kind of interesting that I have learned by living with this group:
Healthy Pancake: Greek 0% yogurt, 1 egg, oat bran – mix well and spread into a crepe-style pan and cook like a pancake. Eat with sweetener or ketchup (the Ketchup was my addition as the sweetener is a bit too sweet to me).
Pancake wrap: Real pancake layered with ham, celery and mayo and roll (I have no tried this recipe yet but I have been assured it’s really good. Not so sure!!)
I usually just do my normal meals of chicken or beef with vegetables and sometimes cheese. I have been cutting out carbs in the afternoon and evening and as mentioned above, alcohol. I have spent weekends running through Hyde Park which I really love. It’s so beautiful and though quite a few people are in the park I feel that there is a ton of open areas that are less populated. Hyde Park is connected to Kensington Gardens and Green Park so you could run for quite a long time!
Here is a little map showing the connection of the parks:

Here is a shot that I took on my run last weekend – it’s a bit foggy as it usually is here in London but a nice view of the Serpentine.

One thought on “London Week in Review: NFL playoffs, Celebrities, Settling In!”